Hider in the House 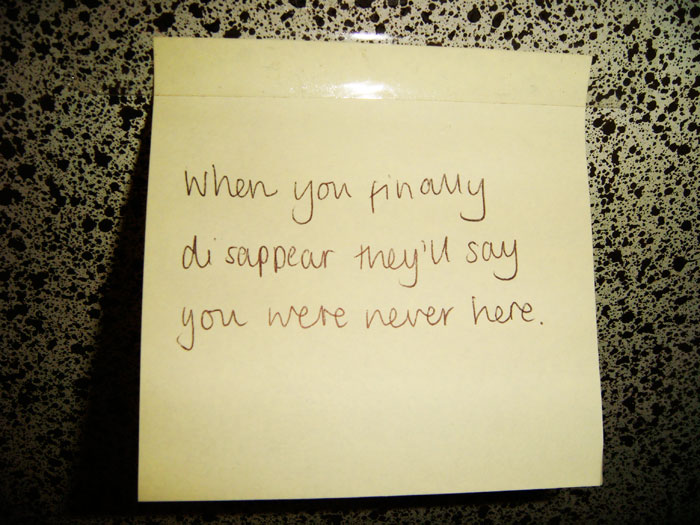 Hider in the House, 2009 (Post-It note from a trail leading to a locked door, Installation view at BAC, London)

Hider in the House, 2009 (Note posted under door, Installation view at BAC, London)

A trail of Post-It notes, with autobiographical and site-specific messages, lead to a locked door. We hide behind it. Audiences are invited to slide messages beneath the door and to wait for a personalised reply…

We have most recently performed this piece as part of ‘Anticurate’ at mac Birmingham in September 2011. It was first developed at Forest Fringe at the Edinburgh Festival in 2008 and subsequently at Battersea Art Centre in 2009.

This performance-installation has three stages. The first involves us spending time in a space, watching its comings and goings over a prolonged period (sometimes in dialogue with regular users of that space). We aim to gather observations that an outsider might not immediately notice. In particular, the relationships between users of that space with each other and the site. These observations are then communicated in the same social space we observe them. In this way, the work acts as a kind of mirror and institutional critique, or a social self-audit (as we are only present at the invitation of the building we occupy).

These observations are then handwritten by us on Post-It notes. (Our handwriting slants in different directions: Oni’s left and Ayo’s right.) The texts additionally include quotations, fragments of remembered conversation and autobiographical detail revealing how we feel at the point of writing.

We hide behind a locked door for the duration of our performance. Participants can interact with us by sliding notes under the door. We reply in the form of mini-collages, using cut-outs from old magazines and newspapers.

The texts are also an exploration of the micro-exchanges that evermore so comprise daily dialogue (the tweet, text-message or Facebook message…)

The title of the work was inspired by a children’s TV show, in which kids have to hide a friend in their home for as long as possible without their parents finding out; it also puns on the meaning of ‘house’ in reference to an audience, as this work was originally developed for an old cupboard in a theatre.